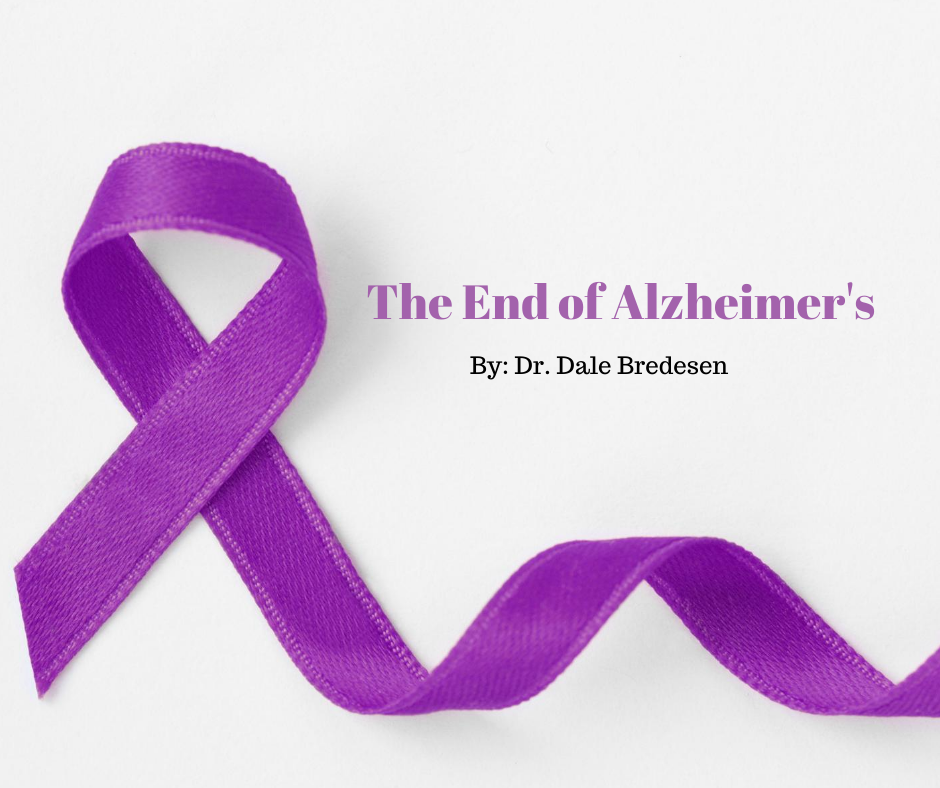 Enter “The End of Alzheimer’s” by Dale E. Bredesen, MD. When this book came across my desk I was immediately curious. What secrets could this book hold to actually reverse Alzheimer’s? Immediately, I dug in to learn more about the people we help on a daily basis.

Dr. Dale Bredesen begins his story by explaining why he wrote this book, namely the unproductive research that has been at a stand still for far too long. We weren’t getting anywhere and so many in the world have simply come to except Alzheimer’s as an inevitable fate. Jumping into this research he began to deduced that we need a total change in perspective. He took a note from traditional medicine practices and decided to ask the important question when faced with symptoms. Why?

“Asking why makes all the difference – including as you’ll see, in the prevention and treatment of Alzheimer’s disease.” – Dr. Dale Bredesen, The End of Alzheimer’s, 2017

Dr. Dale Bredesen didn’t go looking for a single pill to cure the symptoms of Alzheimer’s. He took an all encompassing approach, looking at each of the factors in ones life that can cause Alzheimer’s.

Dr. Bredesen spends a lengthy few paragraphs in his book describing in detail an example of the typical American’s day. He is sure to describe the many little seemingly insignificant things that we do on a typical day. Through-out the monologue you find you’re checking things off, realizing that they are too many things that you do yourself in a typical day that are in this list.

He utilizes this example to point out how many American’s choose to live their lives and how they can cause their own brain’s demise. Sedentary lifestyles, diet, inadequate exposure to the sun, these are just some of the long list things that many of us are doing on a daily basis. All of which, can cause our cognitive decline. To me, that it so important. These aren’t things that are fixed by taking pills, these all are based on our own will and power.

Yet, I know many of us would rather us continue to look for a pill, that easy to solution to an extremely complicated problem. Americans reject being at fault because changing these things is almost like admitting we failed. We are always thinking about when we will be able to relax and do the things we want. We never want to choose to change to better our health. Is the cost of our cognitive functions and the suffering of ourselves as well as the burden on our caretakers for years down the line really worth it? I personally, would much rather moderate that relaxation time and be able to keep myself healthy for longer. I want to leave this world with my mind intact.

Dr. Bredesen introduces to us the regiment that can prevent and end reverse this decline. He details for us all why medically this regiment works. ReCODE is designed to work with the body in preventing beta-amaloids and effectively preventing Alzheimer’s. Beta amaloids are not a new discovery, many researches have been focusing in on beta-amaloids in trying to figure out treatment for Alzheimer’s disease. In fact most of the data and research the ReCODE regime fights against are based on research that many other researchers have found and identified as causes of Alzheimer’s.

ReCODE is all encompassing and those that have tried it have seen real results.

So why hasn’t ReCODE become more mainstream? Because fit doesn’t fit the Medical industries standards for treatment. Why doesn’t it fit? Simply because instead of a one time pill like the ones they use everywhere today, it’s a program. One that includes diet and exercise. Dr. Bredesen’s research is extensive but thwarted by the inability to be accepted by the Modern Medical community as a real treatment for disease.

I hope that soon this will change and Dr. Bredesen’s work can get some real traction, changing the lives of those with Alzheimer’s and their caretakers as we know it for the better.

If you have any questions about The End of Alzheimer’s, contact us today!

Julie Densmore
19:52 10 Aug 20
The Best Medical Investment and Care Decision Our Family Has Made I highly recommend Holistic Aging for their Life Care... Manager support of an aging loved one who may be living in the Pittsburgh area. Bobbi and her team of qualified individuals are compassionate and trained in geriatric care management. They have provided unsurpassed medical and general support for my 85 year old mother-in-law (MIL) over the past 2 years while we are living on the West Coast. Their services provide us with peace-of-mind and confidence that our loved one is safe and cared for even when we cannot be present. Their expert care has enabled my MIL to live comfortably alone in her home. They have helped to systematically address and resolve my MILs growing medical issues and ensure that her most pressing challenges are adequately managed. Our life care manager, Kristi - who is a RN - accompanies my MIL to all doctor appointments to ask the right questions during the visit. Kristi maintains a comprehensive picture of my MIL's health conditions and acts as her personal advocate at all doctor visits. We chose Holistic Aging for their fusion of both East and Western treatment modalities that are tailored to the unique individual so along with medical care, my MIL has received acupuncture, nutritional supplements, massage, and myofacial release therapies - all considered to be "alternative" to treatments and normally would not have been offered. However, each of these treatments have majorly improved my MIL's well-being so we welcome the East/West treatment fusion that Holistic Aging provides. We are incredibly grateful and impressed with the service that Holistic Aging provides for our family. I highly recommend them for care of a loved one. Thank you Bobbi and Kristi!read more