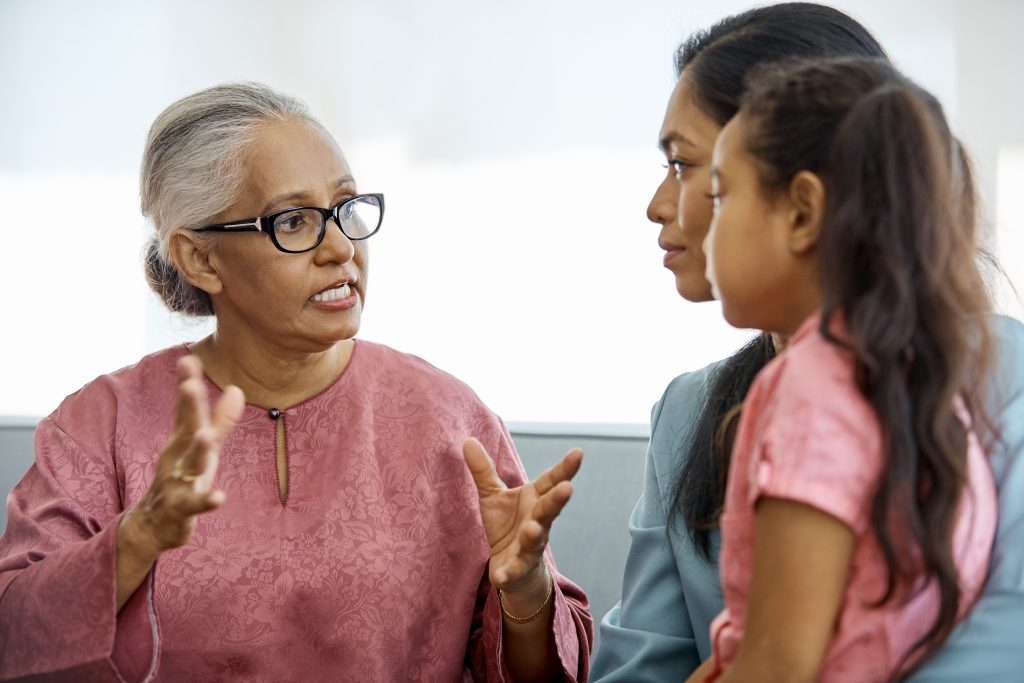 During the pandemic, Esther’s mom moved in to help with the children while Esther and her husband worked from home. Because of her arthritis, Mom needs help with certain tasks, so it seemed like a win-win situation. But even though they’re a loving family, they’ve experienced friction when it comes to parenting … and grandparenting.

Sunday, September 12 is Grandparents Day. Since the pandemic began, many grandparents have experienced quite a bit of disruption! Some have been unable to see their grandchildren as much, due to travel restrictions and quarantine. In-person visits were replaced by video chats. When new grandbabies were born, grandparents couldn’t immediately meet them in person. “It’s been heartbreaking!” many grandparents agree.

Other families had the opposite situation, experiencing more togetherness than ever as grandparents sheltered in place with adult children and grandchildren—either to keep grandparents safe as they received care at home, or to provide child care while parents were working from home, or both.

No matter what their situation, many families ran into age-old generational conflicts that were common and familiar even before the pandemic. Navigating parent/grandparent conflicts can be difficult.

In 2020, researchers from the University of Michigan polled parents of children younger than 18, and found that nearly half had experienced parenting-style disagreements with grandparents. “For some families, what happens at Grandma’s house stays at Grandma’s house,” the study authors noted. “But for others, clashes over parenting choices and enforcing parents’ rules can cause major strife between a child’s parents and grandparents.”

Said researcher Sarah Clark, M.P.H., “Grandparents play a special role in the lives of many children and can be an important resource for parents through support, advice and babysitting. But they may have different ideas about the best way to raise the child, and that can cause tension.”

Clark and her team highlighted several common sources of conflict:

Social norms. Grandparents may interfere when it comes to the children’s manners, dress, and whether they need to clean up their plate at meals. They may disagree with parents when it comes to material possessions and screen time for the kids. You might hear: “My grandkids love action figures, but my daughter-in-law said no plastic toys” or “Mom disapproves if Noah wants to wear pink.”

Safety. The Michigan team reported another classic grandparent saying: “That’s not how we did things, and you survived.” But grandparents raised their own children before current research-based recommendations on such things as car seats, putting babies to bed on their back, allergies and spanking. Pandemic safety has made things even more complicated. And while grandparents may love posting photos of the grandkids on social media, they should respect the parents’ wishes in that department as well.

Navigating these parent/grandparent conflicts and conversations can be so fraught and difficult! “Old business” between parents and grandparents can bubble to the surface. “When you hire an outside babysitter, it’s straightforward to discuss parenting rules,” notes Clark. “With family, there are different dynamics; you’re worried about hurting Grandma’s feelings.”

Clark offers some suggestions for navigating these parent/grandparent conflicts and getting everyone on the same page. “Grandparents may have a hard time understanding why parenting and medical advice has changed so much since they raised children,” she says. “Consider inviting grandparents to a pediatrician visit or sharing articles from parenting magazines or websites to help them feel more up to date and involved.”

Today, with our increased longevity, there are more grandparents than ever, and they serve a vital role in the well-being of their grandkids. Research shows that children usually thrive in an intergenerational family. “Parents and grandparents may not always see eye to eye on parenting, but if conflicts aren’t resolved, no one wins,” says Clark. “Our findings indicate that grandparents should strive to understand and comply with parent requests to be more consistent with parenting choices—not only to support parents in the difficult job of raising children, but to avoid escalating the conflict to the point that they risk losing special time with the grandchildren.”

We know this is a stressful time for family caregivers, who may be caring for a loved one, holding down a job and dealing with other responsibilities. The professional Life Care Managers at Holistic Aging help families create support systems for older loved ones, helping them weather changes in their family dynamics that come with the years.

Source: IlluminAge with information from University of Michigan Medicine